To summarise the winter, it’s been a huge learning curve to say the least… I got thrown in the deep end to be honest. Especially with everyone at the peak of their game in the Olympic qualifying year.
It was a bit intense mentally and physically during the first half of the winter. There was also a lot more travelling than what I was used to. Nonetheless, I have my first World Cup season and probably the most challenging one out of the way. To begin with, I just wanted to make sure I made it down the course and to come away in one piece! Towards the end (Feldberg, World Champs and the World finals), I actually felt like a competitor and was determined to race and beat people. So, there was a definite change in mindset and something just clicked. It was risky but it has paid off to be where I am now.

My result at World Champs and making half of the Olympic criteria really gave me a huge confidence boost and eager for more. As a result, Veysonnaz (WC finals) was probably my strongest performance yet in terms of my riding. It’s been such good experience having time on the bigger courses as this has really enabled a lot of progression in a short space of time. I am grateful for my coach who has pushed me and also to my team mate, Zoe, who I’ve learnt a lot from. I’m currently ranked 33rd on the Olympic quota allocation list, which is super motivating! I’m hoping to attend all the World Cups in the lead up to PyeongChang 2018 to give it my best shot! Exciting times ahead… 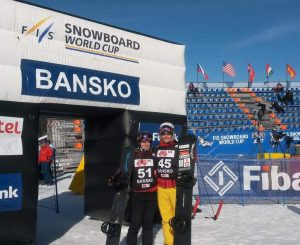 “This was her first World Cup season competing alongside the stars of the sport including fellow Brit and Team GB Olympian, Zoe Gillings-Brier. Although she admits her first experience at this level was a huge challenge, this should now give Maisie the confidence and the platform to push on to the next level.” – Sockmine 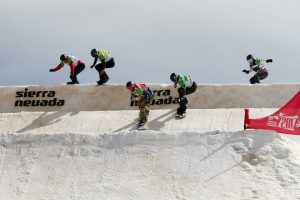 “As the season progressed, Maisie gained momentum, securing several strong results at the back end of the season. A highlight being the World Championships in Spain where Potter first cracked the top 20 at that level, earning an impressive 14th and meeting half her Olympic criteria in the process.” – Sockmine