Hey! I thought it was about time that I updated you all on the winter that’s currently unfolding…

February 3rd. I’m sat in my home in Morzine, France, staring out the french windows watching the pouring rain slowly depositing litres of water. This is not normal. It should be much colder and snowing higher up at least. This season, I’m really noticing the effect of climate change on our mountains.

My competition season has also been hugely affected by the warmth. In January, I had a number of races cancelled due to the lack of snow. Thus, one of the reasons, I have been a tad quiet during a usually active part of the season.
This brings me to some of the difficulties in my sport, which I hope is an interesting topic for some of you.

Firstly, let me begin with the down time as that has been the most recent challenge. 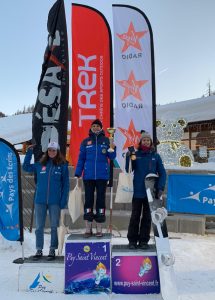 Earlier last month, I landed on my first Europa Cup podium in second position in Puy St Vincent, France. Something I have been dreaming of for a long time. Almost too long with the disruption of a major injury. This reminded me of that emotional high in snowboardcross and reassured me that I am good enough despite a lot of doubt and challenges in the past 2 years.

After the race and prize giving, I didn’t get back to the flat until around 6:30pm, which was almost a 12 hour day. I then had to prepare my boards and go up and do it all again the next day! I’ll be honest, after a career best and all the excitement, I was exhausted. Nevertheless, with very little energy, I finished 8th. We drove back home straight after the race.

Following a hectic weekend, the next week was a very slow one. I felt a bit lonely. Despite all the amazing messages, I wasn’t really sharing the result with anyone as much as you’d think. I also had no plans lined up as the next two events were cancelled including my first World Cup of the season in Germany. By this point, I’d missed the opportunity to go to Canada for a World Cup over there.

It can be very frustrating putting your mind and energy towards something, which doesn’t end up happening. I really wanted to keep up the momentum from my podium. However, with everything getting pushed back to later in the season, it can be hard to stay motivated at times. In the meantime, you’re somewhat ‘on hold’ and ready to perform when the schedule changes last minute.

During the winter, it’s either full on training/ competing/ traveling or recovery/snowboarding at home. Every night before a trip, I can be really anxious because of that transition of pace. This wave happens every couple of weeks, which takes a bit of getting used to. I have started recognising the pattern of when, how and why, I feel a certain way.

The bigger picture of why it can be frustrating: living at home to save money, physical training over the summer and autumn months, ongoing mental focus, sacrificing friends, nights out, not pursuing other passions… to then have a season with very few races.

I know what you must be thinking – a season in the Alps doesn’t sound so bad right? I agree, it is totally cool. I’d always choose to be snowboarding in the winter. However, unlike ‘seasonaires’ who have jobs in resort and meet people that way – we are almost self employed if you like and our “work” is away. It is such a cool life meeting so many international like minded people but then this makes is harder to find home. Perhaps the feeling during these long periods of downtime, is the need to get back on the move and feel a sense of purpose, a reminder of what we’re working towards.

So, how do I keep motivated? One of the ways, I cope with this is to mix things up a bit and work on all aspects of snowboarding. Fortunately, there is always something you can do! 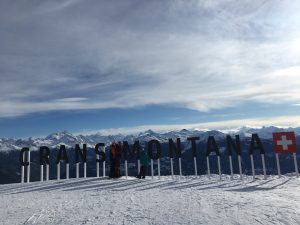 I took the opportunity to drive 2,5 hours to Crans Montana in the Rhone valley in Switzerland, somewhere I’d wanted to visit for a while. 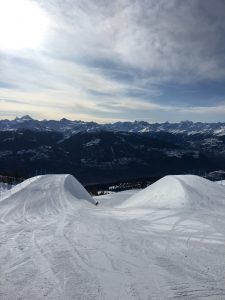 It was the perfect time to check it out as there was a boardercross track as well as a halfpipe, hurray! I tagged along with Fastride, a younger Aussie crew. It is really refreshing to bounce off some younger energy.

I also used the free time to join my Dad (RPM Guiding) on his splitboard intro course in Chamonix (about time!). We skinned up to and beyond Lac Blanc beneath the Aiguilles Rouges. Conditions weren’t great but it was still a fun day out in the mountains.

More recently, Karel is coaching a young girl, whom I’m riding with too to help me structure and plan my week. I also really enjoy giving feedback and inspiring younger riders – to be on the other side of coaching for a change. 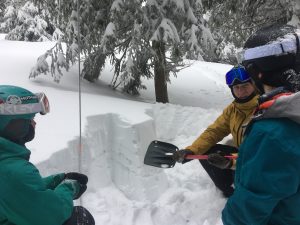 We even refreshed ourselves on some avalanche safety! With the strangely warm weather conditions out there, it is important to understand what this means to the snowpack over a long period of time. This is why we always want to check the weather over at least a week rather than just ‘todays weather’.

The second half of the season, all being well, should ramp up race wise. There are six Europa Cups left of which I’m currently ranked 5th so I will aim to be in top three. Snow dependant, I will be going to the World Cup in Sierra Nevada in March. Last time I was there was the World Championships in 2017! 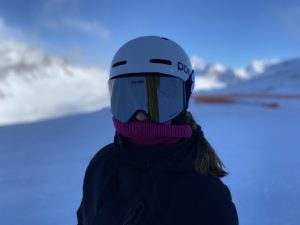 Thanks to all my sponsors, family & friends for supporting me on this journey and thanks for all the amazing messages after my podium. It felt amazing and it is huge weight lifted. Here’s to many more!