As most of you already know, I have spent a month in Chile & Argentina and what an amazing first experience in the Southern Hemisphere.

I’d always wanted to go to South America… My Dad used to lead treks in Peru and Ecuador on and off for about 5 years and my parents went there together just before I was born. I could always see myself liking South America. I have also been really intrigued by Patagonia as it has a history of Welsh settlements and is still present in some regions today. So I was pretty excited to have the opportunity to go!!

So here’s a summary of my trip… 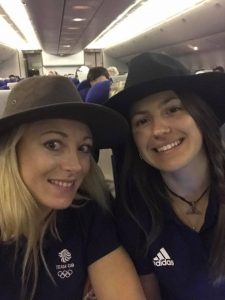 And we’re off (with Emily Sarsfield)

The journey was long! It started in London and we flew 14 hours to Pistarini International airport (EZE) just outside Buenos Aires. Then took a 1 hour shuttle bus to Jorge Newbury airport (AEP) situated in more central BA by the coast. I was pretty engaged during the drive as we drove past a lot of shanty towns, which was eye opening.

It was a bit of minefield at the smaller airport,  as no one really spoke English, and we were still adjusting to the Argentinian way. There was a weird system in order to pay for extra weight of our luggage (the joys of travelling with loads of snowboard kit)! Anyway, we just about boarded the second flight to Bariloche in time, which upon arrival was in a crazy snowstorm! Going from summer to winter was pretty exciting. It was like when you first see the snow fall in the autumn and it feels like Christmas!

Pablo, our taxi driver, who was to drive us to Chile informed us that the border closed in 1 hour and we were at least 2 hours away. So we stayed the night in Villa Las Angusturas by the Chilean border. This was a very nice town with quite modern shops (lots of leather!) and steak restaurants… It was rude not to! Our room was like a scene from Goldilocks and the 3 bears.

The next day, we did the final drive to Corralco, Chile, which took about 9 hours. Although the Chileans were very friendly, They checked EVERY bag and we had a lot of kit bags… so this took about 2 hours. Corralco was even more wintry… perhaps the most snow I’ve ever seen ! We stayed in a nice hotel at the foot of Lonquimay volcano, where there is quite a small resort, with only about 2 chairs and 4 drag lifts. . There were many other teams staying here to train such as different Para Snowboard teams, the RAF, Women’s US downhill alpine team and other SBX national teams. 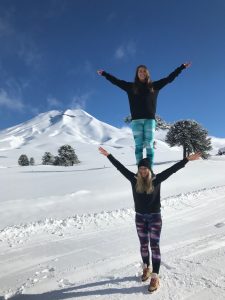 The atmosphere was a little bit tense at first because everyone was getting cabin fever from not being able to train due to endless snowstorms, the worst in years apparently! Sure enough, the first day was spent at the hotel in the gym and not on the hill… We built a pump track and got some other teams involved. We ended up doing evening pump track sessions most evenings after that. 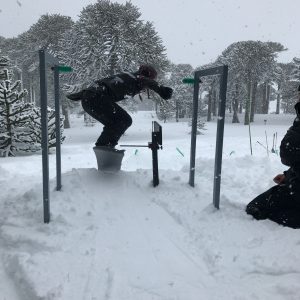 Pump track behind the hotel

Eventually, the skies cleared and we rode some of the best powder! Pam Thornburn (one of the skicross athletes) and my coach, Guillaume Nantermod, and I also took a 1h15 hike and got an amazing run of just freshies. Little did we know, Pam & I would be doing our first free Freeride contest on the same face the following week and I finished 2nd!! 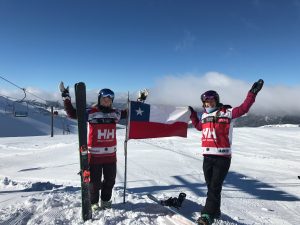 The snowboardcross track was eventually dug out and we did more start training with the Austrian, the Swiss and the Turkish national teams. Everyone was pumped to be training but still no full course, which was frustrating. However, with the South American Cup approaching, more of the course was re built each day. As the training camp was coming to an end, things ramped up a gear with the Freeride contest, official race training day and then race day. 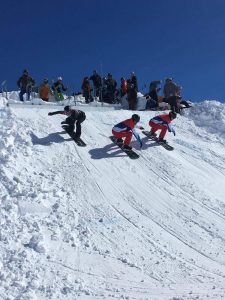 Race day was interesting… I was feeling quite confident as my starts had been pretty strong and the start section was the most technical part of the course and long too. I won my quarter final, then in the semis I had the lead until the first jump but judged the speed wrong and overshot the landing too deep and sat down. I was catching up but couldn’t in time. I was gutted to miss out on the final, when I knew I belonged there. However, winning the small final is also nice ending on a high. It is also all good practice physically as well as mentally going into the first 2 World Cups.

The next day, we drove back to Bariloche through scenic Patagonia. We stopped for empanadas in a cafe in the middle of a long straight road. I liked this cafe, it had a lot of character and was playing country music. 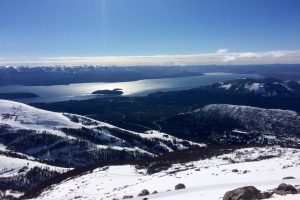 San Carlos de Bariloche is a lakeside town, quite a popular destination in S.A. It was nice to be back in civilisation! Arriving at the World Cup accommodation was a bit overwhelming as ALL the teams were there and I was also informed that the official training was to be the NEXT day. This was a last minute change due to weather, thus missing a day off but in the end, it worked out great. We had 3 hours to inspect the course and train under the beautiful sunshine with stunning views of the lake. The resort itself is called Cerro Catedral. 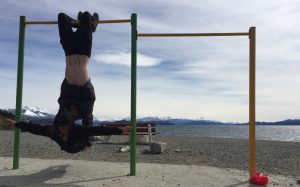 The day off was now in between training and qualifying day, which worked out nicely. We played football with some other teams in the morning and explored the town in afternoon and ate more empanadas.

Quali day for race No.1 was a bit disappointing. I couldn’t put down a clean run as I was messing up the start section, which I thought would be my strength so this knocked my confidence slightly. I was in 21st after my first run, but didn’t improve my time on my second run, and ended up in 27th. Top 24 went through to finals so I just missed out. GB team mate, Zoë, went through so I was able to cheer her on and she finished 14th 🙂 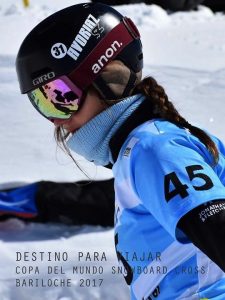 Race number 2 went better; finally my riding clicked and I managed to put down a fast second run and qualified in 21st place. This would have put me into the finals but it was decided to only qualify 16 that day… typical!  After a high number of crashes the day before, they decided it was too narrow to race 6×6 , so changed the format to 4×4.  However, I was happy with 21st as this was my best qualifying time at World Cup (except 18th at 2017 World Champs). It was also closer to an Olympic spot so this has really motivated me going into the next races, starting in December in Europe. 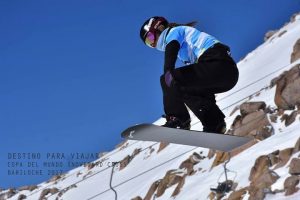 That night, everyone went out to probably the smallest bar in downtown Bariloche. It was pretty fun! Literally all the teams were there for a celebration before leaving early the next morning to fly to Buenos Aires. The flight was mainly taken over by snowboarders. A travelling circus! 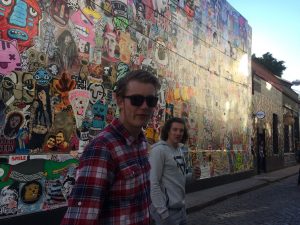 BA is divided into “barrios”. Barrios are neighbourhoods and Palermo Soho was my favourite barrio. Modern, trendy and hip! If you’re ever in BA, go there for brunch! We stayed in a hostel in San Telmo, which felt like colonial Spain with cobbled streets and cute old fashioned cafes.

La Boca is famous for the Bombonera football stadium and Caminito, the colourful artists street by the water. La bombonera is football hub of blue and yellow colours and birth blace of Maradona. You would expect a cauldron of noise on match days. 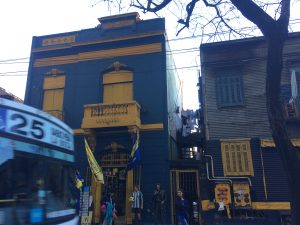 All in all, a great trip and an amazing experience. Getting on snow and racing so early in the year was new to me but very valuable.
I’m now really motivated and I have 3 months of training before back to back World Cups starting in December. Can’t wait to have snow under my feet again and kick off the Euro winter in just over a week!

Until then, hasta luego S.A – I will be back!

I would like to add… I had the news whilst in SA that British Ski & Snowboard awarded me (1 of 9 young winter athletes) a grant from British Snowsports Fund foundation. So Thank you!! Also, shout out to the rest of my sponsors for helping me out! X