I have been wanting to update you all for a while now but it seems you can’t force writing. So finally, I had that moment of “I know what to write” as well as the time so here it is… Better late than never!

This season was my first season back after dramatically missing most of the Olympic one! With the Olympics recently out the way, it was the beginning of another four year cycle and everything was more relaxed. The tour was a bit scarce in the end with only four world cups, world cup finals and the biggest event of the season being the World Championships held in the US in February. 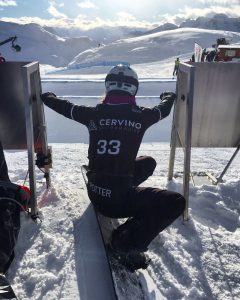 The first race of the season in Montafon, Austria was cancelled due to a lack of snow. The second one in Cervinia, Italy, therefore hosted two races. This was my first World Cup since my injury 12 months ago at the time. I was surrounded by a new team that consisted of my team mate Charlotte Bankes (current World Champs silver medallist), coach Jérôme and a wax technician. We arrived a couple days early to ride, board test and generally ease into the first event of the season. The week certainly challenged me mentally but I managed to have some positive outcomes in the end.

Training was a tough day. Emotions were high and I struggled with the nerves. Eventually, I managed to snap out of it and get myself down the course so that I wasn’t going in blind on race day (the next day). Thankfully, it got better! My first qualification run (seeding against the clock) ended up being pretty fast and I was in 23rd position (24 through to finals). However, we struggled with the wind that day and I wasn’t able to better my second run as I got swept off my feet by the wind on one of the last jumps! The second race was straight into heats (head to head 6×6) so that it was fair with the wind. I managed to smash the start and come out in second behind the World Champion at the time, Lindsey Jacobellis. I stayed in second most of the way until eventually I was drafted in the last turns on the longest track of the season! Glad to have been in the mix and battle to the finish for my comeback. 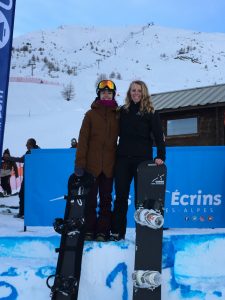 GB girls in the final!

The gradual climb continued as I made it to my first ever big final (4th) at the Europa Cup in Puy St Vincent (France). It had been a while since I last did an EC, so I was pretty excited! I really enjoyed riding this course as it was really fast and not too scary so I was able to just ride my best! We had a bigger squad at this race so there was a really good atmosphere and we all stayed in a nice apartment (provided by Charlotte’s family so thank you). It felt so good to be riding my best when it counted and get the result I deserved! Although we had an 8 hour drive back to Austria straight after the race (thanks for driving Karel), I was on such a high from my performance.

Unfortunately, the second half of the season didn’t go as well. We decided to skip World Champs and do more race training at EC so I went to Lenk and Grasgehren, which provided really good training but not the results I wanted. After some time off during World Champs, I raced two more World Cups (Feldberg in Germany and Baqueira in Spain). Baqueira didn’t last too long as I crashed in one of my training runs and got whiplash on my neck, which was a little scary. 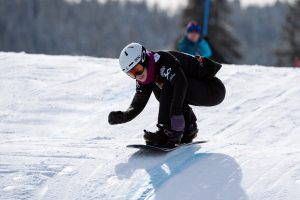 My first few races were relatively successful because I definitely hadn’t expected a whole lot. However, as I grew hungrier for results, it started to go downhill. I was more and more frustrated with not being able to perform at my full potential. Looking back, I was still dealing with the extent of the injury physically and mentally throughout winter. I was getting it done but I knew I would be playing catch up until the off-season. 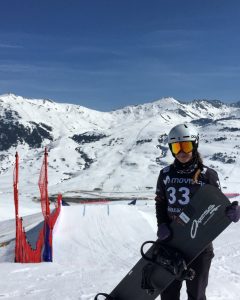 That brings us to after the last race in Baqueira, where I had many mixed emotions: relief, disappointment, frustration to name a few… However, thinking back to where I started: not being able to walk, snowboard and then the doubts of racing, I have come a long way. Three World Cups, 4 Europa Cups and a big final under my belt is an achievement I’m happy with despite the set backs and is all really valuable going into next season. I’m hugely relieved to be healthy and injury-free after a challenging year and that now I feel the best yet since my accident and am feeling on track for the 19/20 season!

Finally, I’d like to thank all the people that make this possible for me.
Special thanks to:
– Snowsport Cymru Wales
– Bangor University
– Surf Snowdonia
– Cofio Robin
– PGL adventure holidays
– Crevasse Clothing
– Funi beanies
– Snugs earphones
– Sockmine
– Floã base layers
– Matrix 10 for this website!