Season 19/20. We’ll all remember this one! Hope you’re all staying safe and staying in.

I’m currently still in France on day fifteen of the Covid-19 lockdown. They have just announced that we have an extra fifteen days now, which will bring us to the 15th of April. It’s pretty strict here with police monitoring around town. We have forms to fill in for every outing, which consists of either a one person food shop or a solo walk/run within 1 km of the house for a maximum time of one hour. No groups and high risk activity (even cycling has been banned). Challenging but necessary times for everyone. My thoughts especially go to the medical staff on the frontline, lost loved ones, those who have lost crucial income and Olympic athletes whose hard work will not be paid off this year. 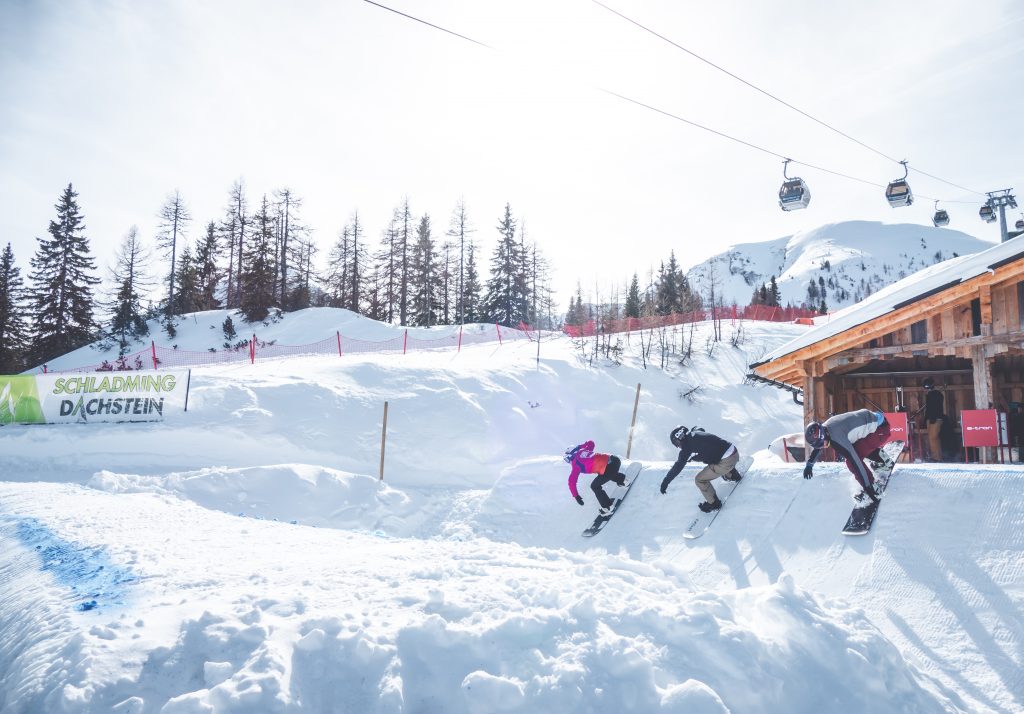 My last blog post ‘Warm Winter‘, was a mid season update. However, as it turns out, not much has happened since! We had a team training camp in Reiteralm, Austria (Salzburg area). We jokingly said this was the destination of of our boardercross pilgrimage. It is a permanent set up with a photogenic wooden hut sheltering two starting areas, which develop into two overlapping tracks. Even in bad weather, you can train starts.

After locking in some good training in Reiteralm, we finally got to race again in Grasgehren, Germany. I finished 8th in a stacked Europa Cup field. Unfortunately, I didn’t get the chance to improve because the second race was cancelled due to strong wind and rain (!) 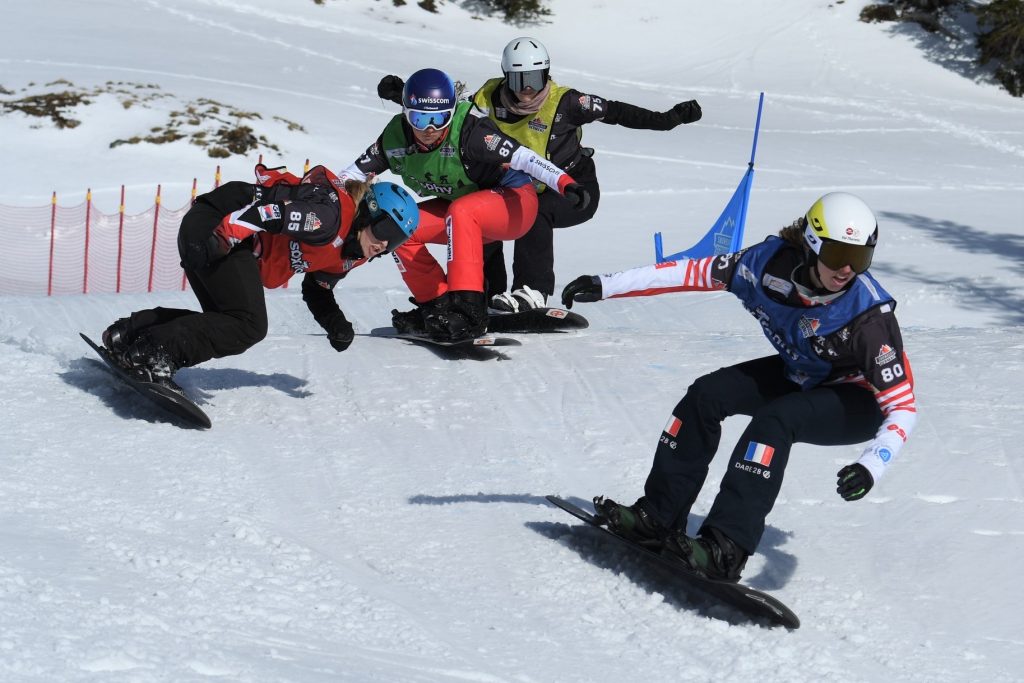 The following week, I went to Sierra Nevada for one of the last World Cups. Sierra Nevada is a beautifully strange town nestled in the mountains above Granada. It is only a two hour drive from Málaga and the south coast of Spain but is at a height of 2,100m and the resort even higher. It didn’t have a lot of snow but somehow they managed to pull off the race! Kudos. 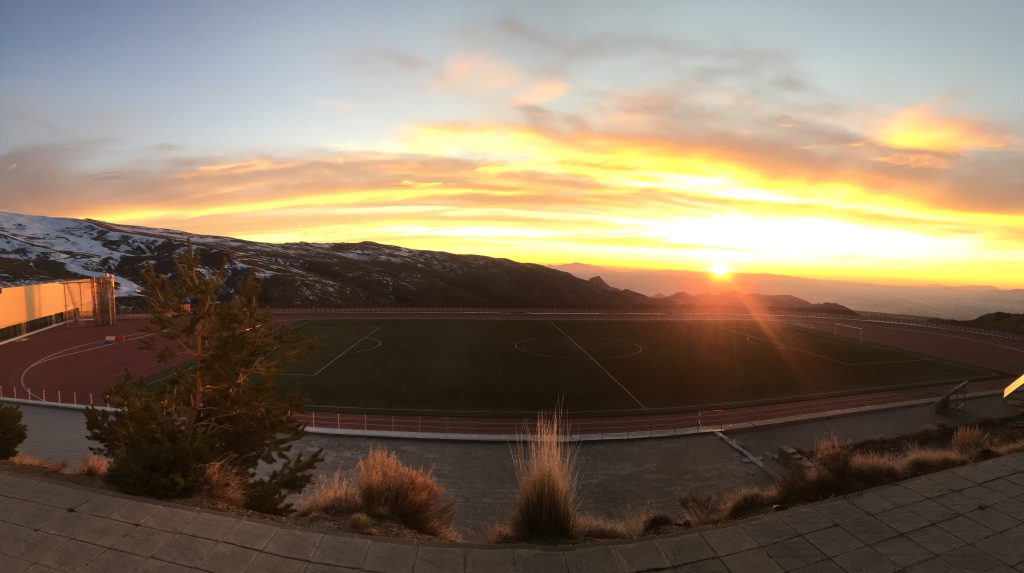 Sierra Nevada sunsets overlooking the athletics track from our accommodation, which is also a  ‘high performance sports center’.

I met up with fellow team mates Bryn and Brandon in Málaga and drove up in to the mountains the following day. It was really fun to be with the boys at their first World Cup and thrive off their excitement. Testing and training day went pretty well. The weather was classic Sierra Nevada: warm and sunny. The boardercross track was running smooth apart from having to make a few changes to the bottom section. Unfortunately, time trials day was super windy and they cancelled it half way through! With one day left, (finals: top 32 men & top 16 women), we were unsure what was going to happen regarding qualification. In the end, the organisers decided to run one time trial each (instead of two) in the morning before the heats. Happy to have another chance at qualifying but sadly it was still very windy and I finished 23rd. I really struggled with the wind as felt like it was slowing me down quite a lot, which is really frustrating when you love the track! Despite this, I was really happy with my riding and frame of mind. Little did I know, this would be my last time on track for the 2019/20 season! 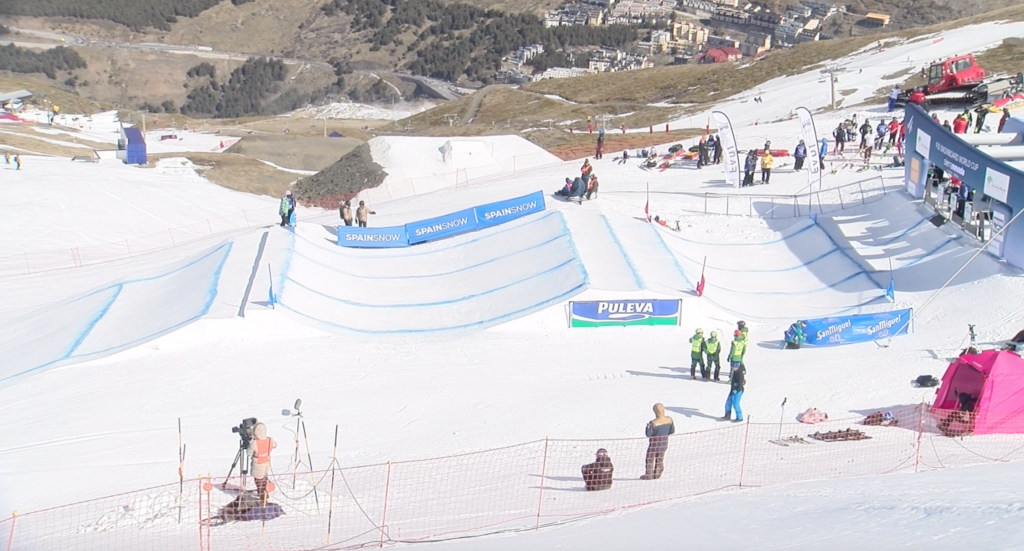 During the week, being an international sports event, Covid-19 was a hot topic and Italy was already on lockdown by this point. We were hearing more and more about events getting cancelled in the Alps…The next stint was two Europa Cup races in Austria followed by a training camp in Crans Montana and two Europa Cup finals in Lenk (both in Switzerland). A day or two before we were set to leave, we found out that the races in Austria were cancelled. We adapted and planned to do the Swiss part as usual. As a result of the cancellation, I was able to watch the World Cup finals in Veysonnaz, Switzerland. However, half of the athletes had been sent home so it was a bit controversial that they ran it… A couple hours after the race, Switzerland announced that all resorts will be closed for the rest of the season!! Based on our experiences in Switzerland, we were fairly sure France would follow suit and close the resorts unannounced too. We packed up, made to abandon our plans of training in Crans, and drove back to France in time for one more day of riding there. Finally, everything shut so we basically stayed home for the day and sure enough the lockdown was announced that night. There was the shattering news: season over. We were so tired by this point of the fast moving and ever-changing circumstances but we just kept riding until we couldn’t!

Fifteen days in, I have lost track of time and not entirely sure what I’ve been doing this whole time… Mainly sleeping, exercise (running, core, yoga), cooking and baking, sitting out in the sun, watching films (finally got round to watching some movies), playing games (poker) and end of season admin (sponsors, emails, finance, blog, social media). Generally, slowing things down, enjoying the smaller things and not feeling bad about sitting around the house, which I’m usually guilty of! 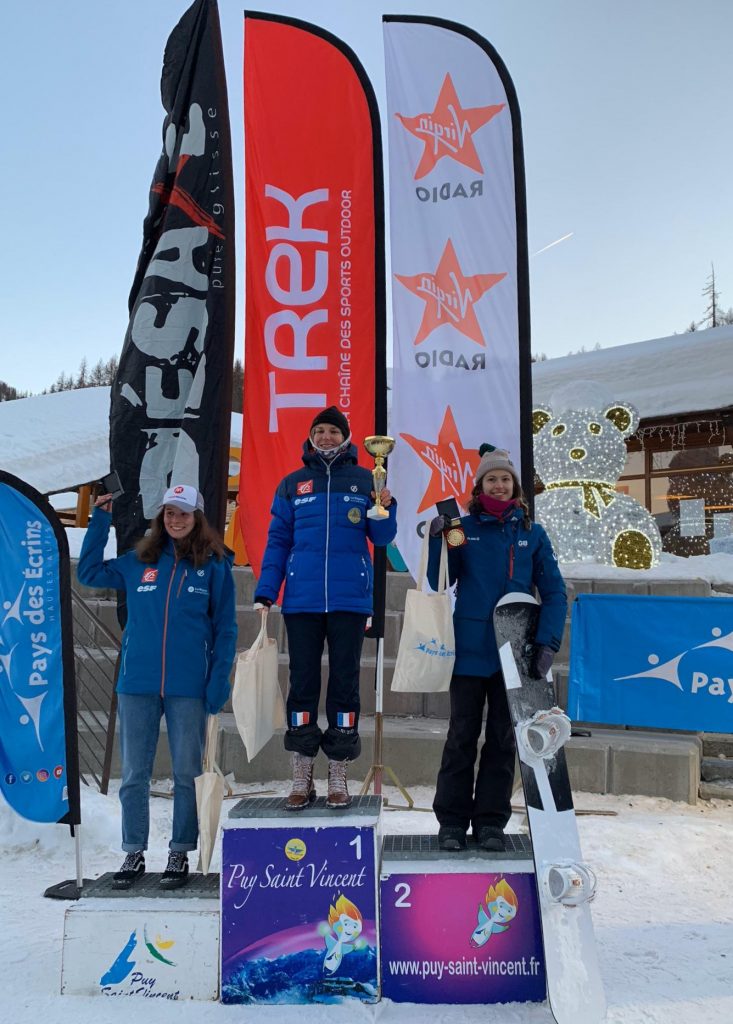 The season has been a tough pill to swallow. Some team issues and complicated travel to competitions. A warm spell with no snow in February cancelling a bunch of races. There was still hope with plenty of races left but Covid-19 sadly ended the season.
Despite all, coming away with my first Europa Cup podium (silver) in January was the highlight of my career so far. I also felt much happier generally this season and confident in my riding; stronger than pre-injury, which is a huge milestone. I finished in 5th place in the Europa Cup standings with what was meant to be four races left with the aim of making a top 3! Nevertheless, pretty stoked on my results and having some decent performances before all the chaos – hungry for more! This brings us to the future.
Next winter marks the beginning of the Olympic qualification period. Times are obviously uncertain at the moment as to when the world will recover from the impacts of Coronavirus. Time will tell what the year has in store. It’s quite strange not being able to make plans when my profession involves mainly planning. Here’s to a healthy world and getting back to what we do and love! And, if we could take something away from this –  being kinder to the environment and community minded. See you all on the flip side and can’t wait to see everyone again! 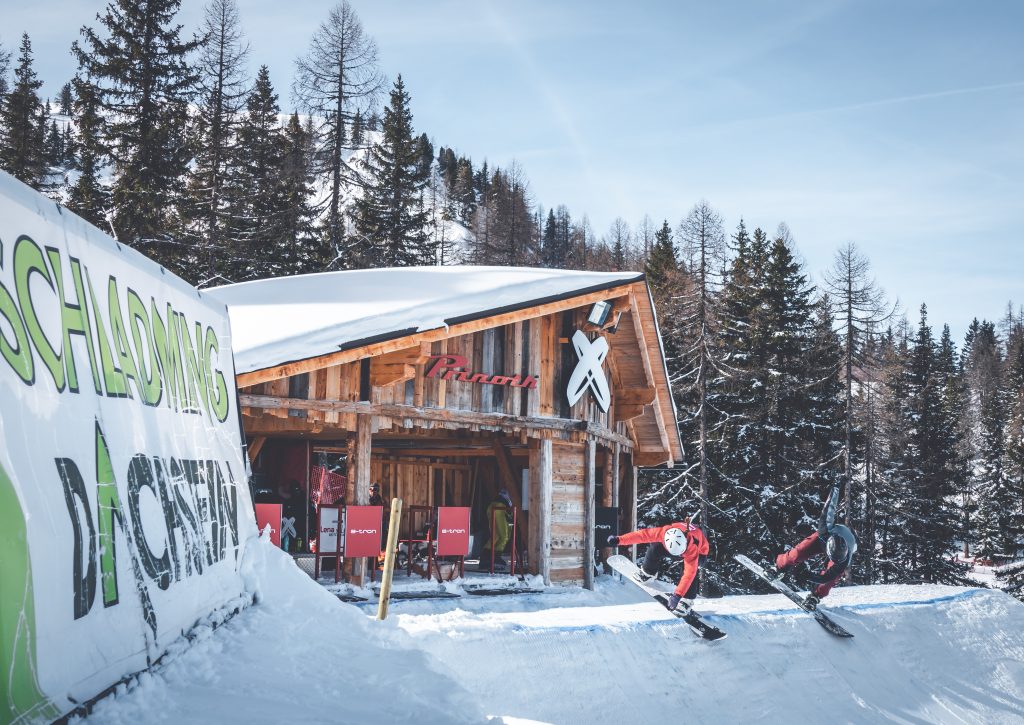 Reiteralm. Riders from left to right: Me, Kyle Wise.

Last but not least, a HUGE thanks to my sponsors for the continued support. I would not being doing this without your help!!